Requires the base gameEuropa Universalis IV 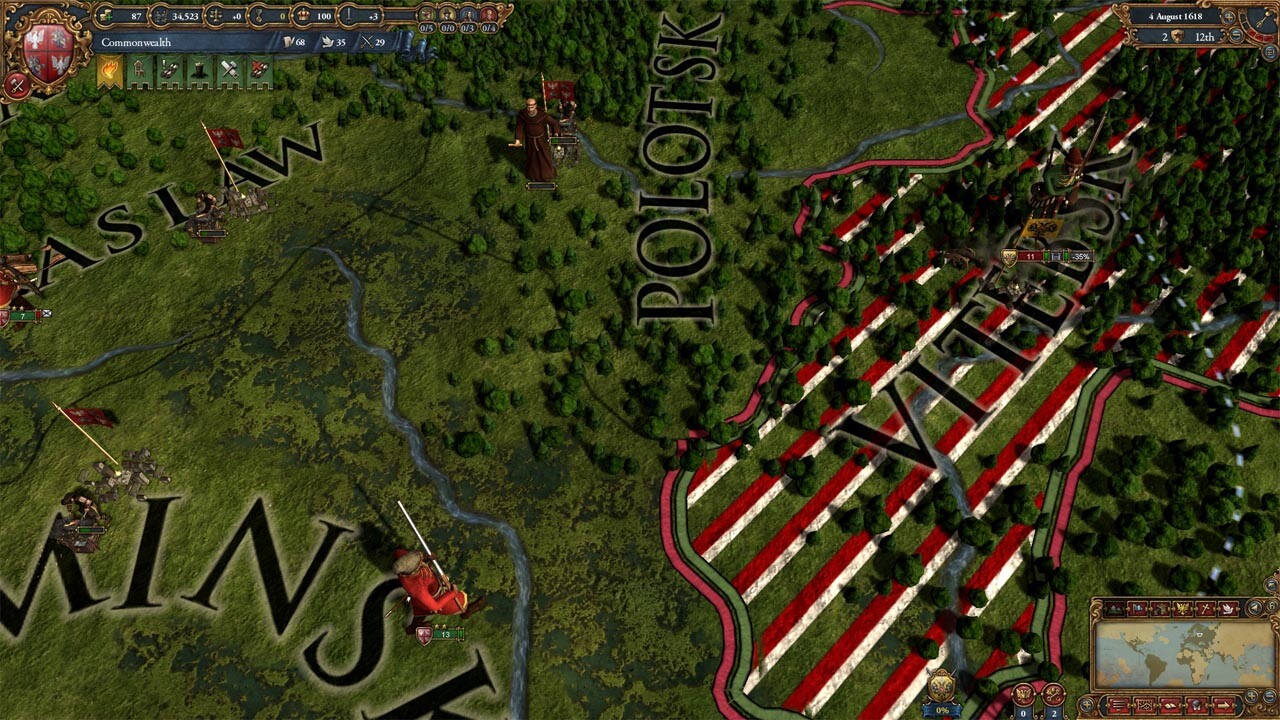 in order to play. Activationkey must be used on a valid Steam account, requires internetconnection. ABOUT THE GAMEParadox Development Studios ups the stakes with the latest andthird expansion from Europa Universalis IV - The Art of War.Centered on the 30 Years War and bubbling political instabilitybetween church and state, this expansion features improved gameplaymechanics that’s puts warfare at the forefront of your quest fordomination and triumph.
Improved naval combat and full army control means the course ofvictory rests solely on your shoulders. Will you choose to triumphalone or rely on the combat strengths of your allies? Your decisionwill decide if your empire lasts through the ages.
KEY FEATURES

Europa Universalis IV: Art of War was recently released alongside the 1.8 patch. While Art of War offers many great features including the 30 Years War event, the real story is the 1.8 patch. The world has become a much larger place in Europa Universalis IV — 45% larger, to be exact. The New World, Africa, India and Asia are not the places you remember colonizing and conquering in previous games; they now have a provence density much closer to Europe’s. There are also more indigenous states which mean that colonization is a far more interesting experience with a combination of colonization and conquest key to success. More provinces means more opportunities for other nations to get in the colonization game. Non-European regions are also more interesting and fun to watch with this new density and even small indigenous state wars in central America can take on an epic dimension. All this extra action, as promised in the patch notes, doesn’t seem to affect performance and the game actually seems to run more smoothly that it used to.

Provinces no longer have individual revolt risks, but instead a group, like Berber nationalist or Reformed Fundamentalist, revolt progress. As time goes on the progress goes up and once it reaches 100, a revolt occurs. If a revolt occurs, large numbers of rebel armies might appear in multiple provinces. This is far less random than it was in the old version and much easier to handle, making the late game in particular play more smoothly and historically accurate in that tensions build until they erupt. It’s hard to imagine a situation where there would be a 15% chance of 25,000 people rising up and fielding and army; in real life tension builds, albeit sometimes very quickly, and then it snaps. Revolt progress can be reduced by spending military points, removing the conditions that are causing the group to be upset (like converting their culture or religion to a more compatible one…), giving into their demands or raising the level of local autonomy. Autonomy is a measure of how much of the taxes, trade power, etc. that the state vs. the local elites siphon from the people. Order can now be bought from the local robber barons by giving regions autonomy. You can also lower the autonomy of a region which will make them upset but will raise the value of a region to the empire. When you take a new region, it begins with high autonomy which eventually decreases as your authority is established. This system also replaces other systems including the sometimes confusing ‘distant overseas’ penalty.

The other two changes of note are a “supply and demand” system for commodity prices (events will affect commodity prices, like hot chocolate becoming the hip new beverage) and “centers of the reformation” which show up on the religion map overlay and induce the provinces around them to begin to follow the same heretical protestant beliefs until they are converted back to the true faith or survive and end up as a new thriving religion. There have been numerous other tweaks in this patch, but what it all adds up to is by far the least frustrating game of EUIV I’ve ever played. There are still some issues, like games crashing on in game loads of saved games. I’ve been thinking of it as an anti-cheating measure, though an annoying and persistent one.

Art of War, on the other hand, adds numerous small enhancements to the game along with a 30 Years War event and new revolutionary mechanics. The 30 Years War Event is great fun, a series of events will occur leading to one of the largest and most interesting conflicts you will experience in EU4. Europe lights up into a colorful moving war zone as Protestants and Catholics fight for the dominance of the Holy Roman Empire. You get bonuses just for participating and you get additional bonuses if your faith is victorious in the conflict. I had experienced wars that resembled this conflict before, but nothing on this scale. In earlier versions, wars of this size would sometimes affect performance but the game seems to be able to handle this massive conflict without missing a beat. This new mechanic also makes religion somewhat more important than it was in previous games as the player will have to watch the spread of Protestantism with a much greater degree of attention knowing that eventually this schism will lead to an all out war and the religion map will eventually be the map of your allies and enemies.
The new revolutionary mechanics are similar to the 30 years war event in that they add a semi-scripted war event with potentially game altering results. After the 1750s, the revolutionary period begins as indicated by a series of ominous messages indicating the people are getting fed up with the status-quo.

If certain conditions are present, a country will undergo a revolution, overthrowing the monarchy and instituting a republic. This will give the country bonuses and give other countries penalties as their subjects start to ask each other what a “citizen” is and begin reading your propaganda. These penalties are severe enough that you will almost certainly want to put down the revolution and sent a message to your own subjects that this sort of thing isn’t going to be tolerated. Fortunately, you’re given a causus belli – “Crush the revolution” that you can use to put out the fire before it spreads. You get to experience the terror of watching your fellow rulers get overthrown and the relief of putting incompetent abusive King What’s-his-face back on the throne to keep the people in their shackles and off the battlefield. This adds much needed depth to the late game, given that before that biggest endgame feature were the frustratingly-open-to-all-comers canals.

Given that this expansion is called “Art of War,” you’d expect some changes to how wars are fought. The best of these is the automatic army and navy generator, which speeds things up and removes the tedium of going province by province and figuring out the fastest way to build the fleet you need. Fighting for you subject’s causus bellis removes one of the most frustrating annoyances in building a colonial empire. The designation of “Marches” allows the player to specialize their vassals for defense, like say Guyenne in southern France, but you don’t collect income from them and can’t annex them. Creating client states out of various regions adds a great number of possibilities to the late game, like creating a French Japanese March to protect your interests in the Pacific or a British South Africa Capable of defending itself. There are a number of other features and diplomatic options that all work great except for the automated fleet transport which I had to disable to prevent myself from accidentally sailing my fleets around the world to try to transport some army. The net effect of all of these additions is a huge reduction in frustration from wondering why you can’t do something that makes perfect sense to you, like going to war with the Aztecs to grow your Mexican colony.

The papal control system has also been redone. Say goodbye to bidding on cardinals, forgetting to bid on cardinals and doing a bunch of math to try and figure out exactly how many cardinals you can hold onto. In the new system papal influence is spent on raw chance for papal control. Each papal lottery ticket is more expensive than the last one and papal influence can be spent to do other useful things, like raise legitimacy or prestige or even reduce inflation.

Art of War and the 1.8 patch add a huge amount of content to Europa Universalis IV and refine much of the existing content in ways that make it smoother to play, allowing the player to focus on what they’re trying to accomplish without as many needless distractions and the stifling yoke of random number generated revolts. The new map is clearly the best and most notable content update but the game is now better in almost every single possible area. Despite some crashing and save corruption issues which need to be addressed, Art of War makes EUIV is worth trying out for the first time or playing again. This isn’t just an expansion, it’s a revolution.