Japan loves its pop idols so much that it even has its own market of music known as J-Pop. Noteworthy groups in this genre that I know off the top of my head include BTS, Blackpink and Red Velvet. It was only a matter of time before someone merged the world of Japanese singers surrounded by overzealous fans and video games, and the result was the birth of Kawaii Deathu Desu. In the game, supernatural beings find themselves incarnated as cute (and sexualized) idols. The beings slowly form a competition to see who will claim the throne of the Underworld – and the one who kills the most adoring fans will become Queen.

A simple mix of One Finger Death Punch and Street Fighter, Kawaii Death Desu was originally released to Steam and PC’s by Pippin Games and Top Hat Studios in August 2019; before eventually reaching the Nintendo Switch just last week. A beat’em up, hack-and-slash title with graphics that fall somewhere between Super Nintendo and PlayStation 1, Kawaii Death Desu features multiple levels, character customization (outfits only), unlockable pictures and music, and the promise of frequent future content like new idols, stages and more. And don’t forget to play competitive local multiplayer mode so you can go head to head with your friends!

I’ve already put a few hours into playing this game and it wasn’t too difficult to figure out. The premise is schoolbook easy – kill as many loving fans as you can. Each fan is a soul that counts as a point. The number of souls you accumulate can then be turned in for rewards like new characters, new levels, new outfits and the ability to level up your avatars. As of this writing I have Death-Chan (a grim reaper) at level 6, Emmy (a zombie) at level 5, Suu (a succubus) at level 4 and Mary (a dragon) at level 4. Death-chan can turn her mic-stand into a giant scythe, Emmy can pull enemies into the grave with help from other zombies, Suu throws deadly kisses and Mary breathes fire. 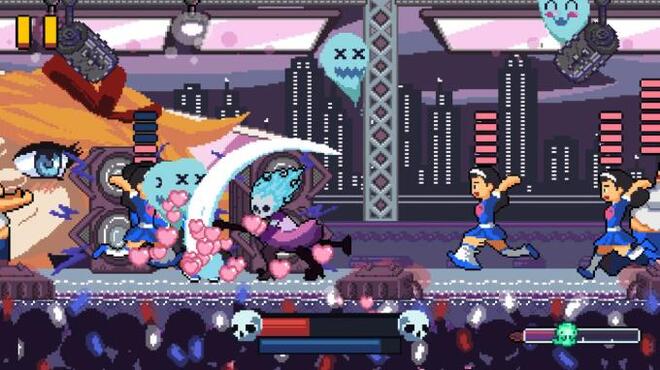 So far, I’ve unlocked seven levels and it looks like I have at least five more to go. Levels get increasingly difficult as you unlock them based on the amount of fans in the swarm and thea mount of HP they possess. It becomes integral that you level up your favorite idols if you wish to finish the game and unlock everything it has to offer. Kawaii Deathu Desu is like an arcade game in nature, that exists through use of algorithms and continuous loops; making it easy to grind, grind, grind out the number of souls you collect. And since you only use two buttons unless you’re on the home screen – R1 and L1 – this is a game you can play while doing anything except driving.

I don’t know how I found Kawaii Deathu Desu, but I’m glad I did. I always find females who kick ass to be super endearing, and that helps make Kawaii Deathu Desu ultra-alluring. Find it on Steam and Nintendo Switch today!

Listen to the Gayming Podcast on Spotify, Apple Podcasts, Stitcher or wherever good podcasts can be found!

Come and join the fun with hundreds of gaymers from around the world in the Gayming Magazine Discord.