The TALOS Principle – What We Think:

Stop me if you’ve heard this before:

You’ve woken up in a mysterious testing facility filled with traps and puzzles. An all-knowing voice occasionally speaks to you to offer encouragement and to remind you that everything will be perfect as long as you follow the instructions. However, there are multiple indications that the voice cannot be trusted.

So yes, Croteam‘s The Talos Principle is the latest in a line of puzzle games that draw heavily on Portal. Fortunately, it’s one of the best adaptations of the premise. As easy as it is to be cynical – and it’s impossible to shake the notion that you’ve already been through these motions – the solid design and the novel subject matter make the game well worth playing, even it does take a while to get to the point.

Solve the Puzzle, Go Back For The Riddle And The Enigma

Let’s start with the good. The Talos Principle is incredibly satisfying to play. The puzzle design is extraordinary, cleverly utilizing many disparate elements in a 3D geometric space. More importantly, the puzzles test logic rather than reflexes. Portal often demanded accuracy at high speeds. Even if you could solve the puzzle, you might not be able to complete it if you weren’t any good at shooters.

In The Talos Principle, you simply have to arrange static items like blocks and fans in the proper position. The puzzles are still devilishly complex, but the solutions are easy to implement once you’ve figured them out and that remains true through to the end of the game. A block will always stay exactly where you left it. It’s a puzzle game, not a puzzle platformer. 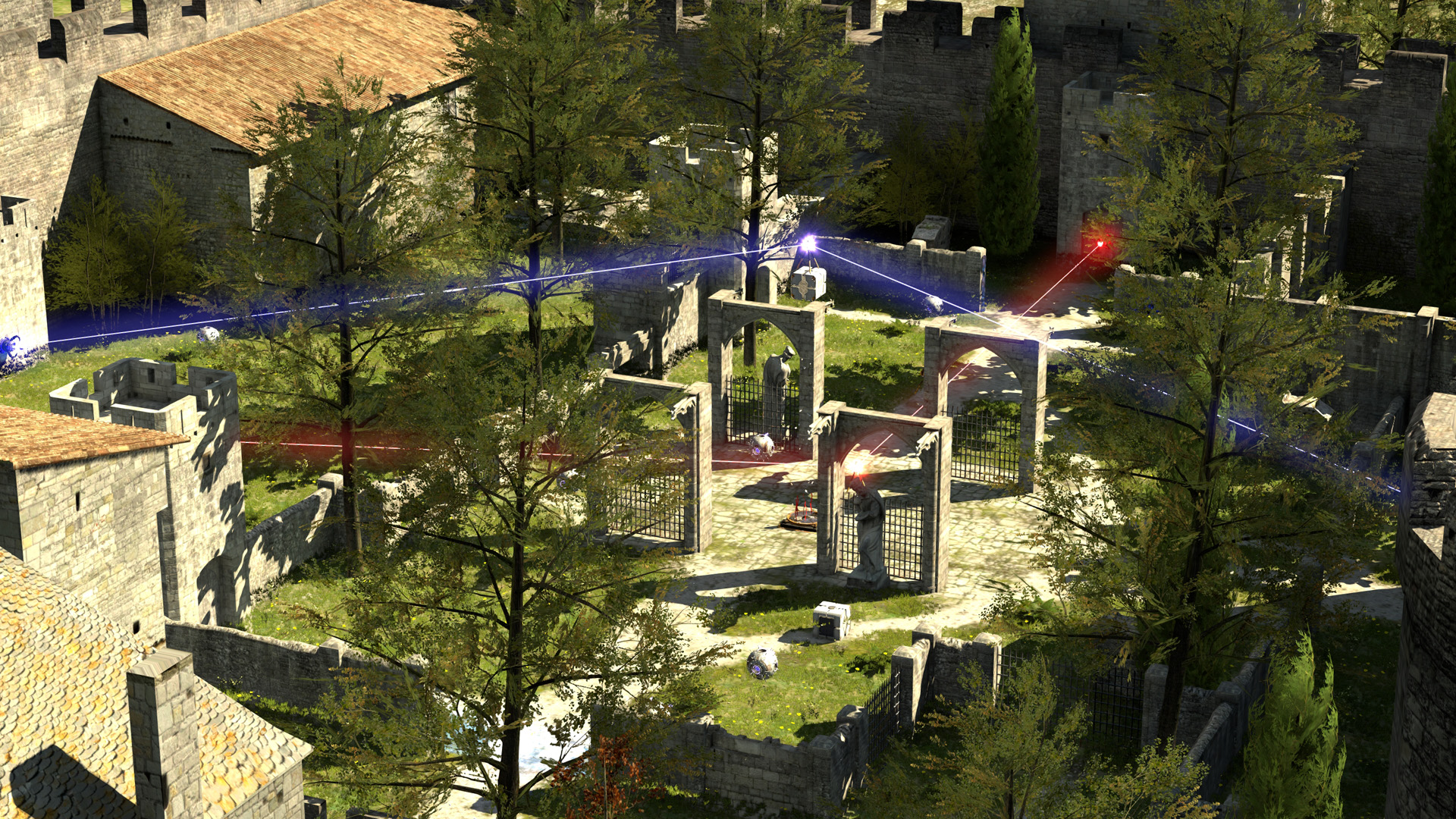 The problem is that those puzzles are literally walled off from the aesthetic aspects of the game. Though The Talos Principle is structured like Portal, the subject matter is quite different. The Talos Principle is about artificial intelligence and the nature of freedom and humanity (the title refers to a Greek myth about a living statue), a theme that creeps into the game through the voiceover and material that you find on computer terminals scattered throughout the game.

For the most part, the musings are effective, making up for a lack of dark humor with a surprising amount of sincerity and warmth. The player character is a robot (that’s not a spoiler), and the game allows you to decide how you feel about your own individuality. What does it mean to have free will? Why do you deserve it when you’re just a mechanical construct? Like the Garden of Eden, the game world is a tranquil, visually stunning place where knowledge is dangled as a dangerous temptation.

The serpent arrives in the guise of a second AI who resides within the computer, a gadfly intellect that primarily exists to play Devil’s advocate. The conversations with the AI are refreshingly organic, constantly challenging you on your conclusions about existence. It can get a little obnoxious when the conversations get more complicated and your response options are limited, but the game is aware of the dynamic and there is a genuine payoff at the end.

Those Who Came Before 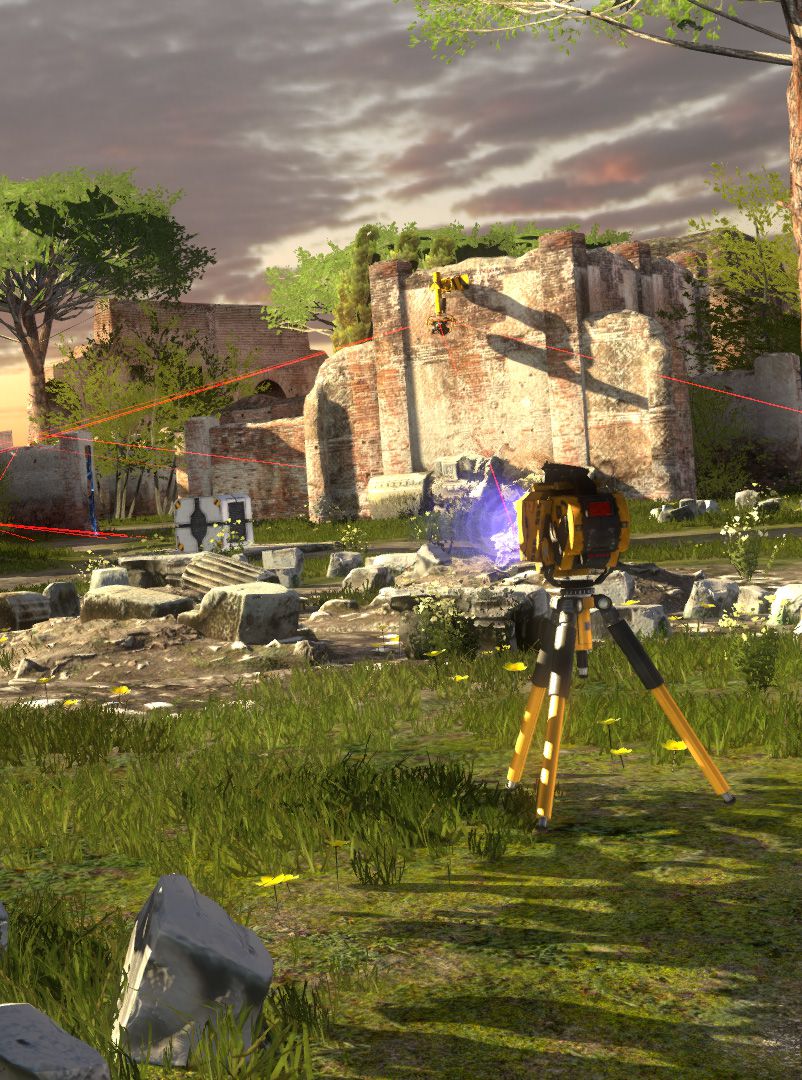 That’s more or less true of The Talos Principle more broadly. The philosophy is not groundbreaking, but the developers are self-aware and avoid the proselytizing that often derails attempts to address abstract ideals in a fictional setting. The game just wants you to think. It disrupts your impulse to blindly click through discussion boxes and fleshes out the world with collectible documents that subtly build civilization around you. It sometimes veers towards the pretentious – the historical accounts detailing Egyptian burial rites are particularly dull – but the memos between staff members of the lab that produced your AI tech are fascinating. 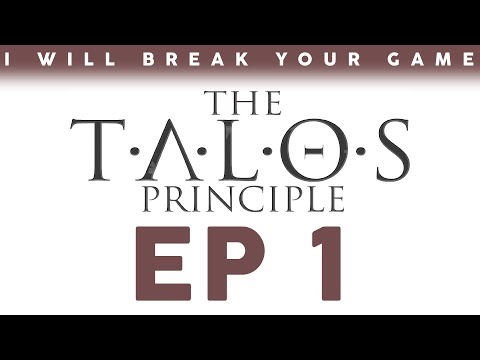 But remember when I said the puzzles are literally walled off from the story? Well, The Talos Principle is composed of three hubs, each with seven distinct zones that house four or five self-contained puzzles. When you walk through a gateway into a puzzle area, the rest of the world ceases to exist. It’s just you and the solution, without any hints at depth or philosophy. Any written material is confined to computer terminals that rigidly dictate when and where you engage the narrative.

Since reading documents requires a completely different mindset than puzzle solving, the story becomes an interruption of the gameplay. The puzzles are purely systemic, offering arbitrary challenges that are enjoyable in and of themselves but don’t offer much in the way of meaning. It’s fun to solve the puzzles. It’s fun to argue with the computer.

But the two never meet, and the complete segregation of the gameplay and the narrative occasionally slows the pace to a drag. Checking in with the computer feels like an obligation that can make it tough to pay attention when you’d rather be doing something else. That’s ultimately the game’s biggest flaw. The Talos Principle is slightly overdesigned, lasting a bit too long without enough variation on the formula to justify the length.

The result is a game that adds up to the sum of its parts, a substantial figure that could have been greater had the puzzles and narrative not existed in separate planes of reality.

The Talos Principle For Mac X

The Talos Principle is still one of the best independent games of the year based solely on the strength of its components. The puzzle design truly is exceptional, and the narrative has higher ambitions than the vast majority of video games. But it doesn’t always hold together as a cohesive whole, which prevents it from reaching the peaks of a game like Portal, or even last year’s Papers, Please. It’s merely very good, and it’s up to you to determine if that’s an endorsement.

Get The Talos Principle on Steam

Watch the official trailer for The Talos Principle below: